From June 1st to June 5th, 1944, Radio-London, with the special authorization given by Churchill to De Gaulle’s Radio Team, using the BBC antennas, did repeat several times the first 3 verses of Paul Verlaine’s poetry named ‘Fall Song’ or ‘Chanson d’Automne’, starting with « Les sanglots longs des violons de l’automne ». They were coded messages for the French resistance fighters from ‘Ventriloquist’ network, telling them to sabotage all the rail links potentially bringing materials and weapons to the German army on the French Normandy coasts.

Over 132,000 Allied soldiers will courageously land on the beaches of Normandy served by the most powerful war fleet ever seen and 15,000 airfighters, who will protect the troops and especially the gliders depositing the paratroopers behind the German lines. Over 17,200 of them will die on D-Day as well as 87 French Resistance fighters prisoners of Caen prison, who will be executed by the local Gestapo chief. This major D-Day where British troops will on a very Gentleman-way let the 177 French members of the Kieffer Commando land first on French beaches will lead to capitulation of Nazi Germany and Hitler’s death. Kieffer 177 commandos will get 7 killed and 60 injured on D-Day and will take over Ouistreham, with the British troops. They will keep fighting until the end of the war.

Paul VERLAINE (1844-1896) is one of the greatest French poets of 19th century. Very early, onlu aged 22, in 1866, he writes the ‘Saturnian Poems’, before he meets Arthur Rimbaud in September 1871. Rimbaud will ruin his marriage with Mathilde, with whom he has a child. Their very tumultuous relationship will last from 1871 to 1873.

In March 1875, Verlaine decides to settle in London, where he will teach Greek, Latin, French and drawing. He spends his holidays with his mother in France. He will also meet in London Germain Nouveau, a former friend of Rimbaud, and he will teach in several British cities until June 1877, before coming back to France. Paul Verlaine will thereafter publish several books and sets of poetry as well as some novels (Complete works in Gallimard’s La Pleïade’), but he will also have a strong influence on late 19th century French poetry, and among others on famous Guillaume Apollinaire.

All suffocating
And pale
When the hour strikes

You will note the originality and soupleness of the French version, assembled and poetic verses of six lines.

We are here nearing The Japanese Haïku, with a number of Verlaine innovations, which will be followed by other French speaking poets.

Please be kind to share with us some of your 6th June, 1944 personal or family memories and of D-Day in Normandy. This OVERLORD operation will change the face of the world and will be decisive towards a victory conclusion of World War II for the Allies. We are looking for complementary documents on the 177 members of the Kieffer commando and their training in Scotland, so as to further share on these incredibly motivated men, who wanted France back to democracy and to freedom. Tribute and honor be given to them and to the British commanders who left them the honour to be landing first in Normandy, with the British commandos following in the next minutes.

French troops and De Gaulle have been welcomed and equipped by the British government and forces during World War II. We will never forget it. 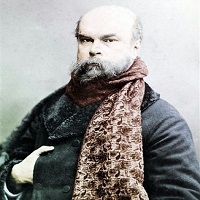